The FT’s arts writer visits China to see how the UK Now festival is showcasing British culture for Chinese audiences.

Four years have passed since China Now, the festival of arts that brought some of the best and newest examples of Chinese culture to the UK. The principle of the festival’s various shows was to shed light on a country that was seen in many quarters as threateningly opaque. Culture could prise open the door to a closed and hitherto mysterious society. Exchange programmes were devised and Britons flocked to engage with a new and exotic artistic language. From the Chinese point of view, it was a classic example of the exercise of “soft power”, adding a humanising element to a diplomatic policy that could otherwise be perceived as intransigent. Culture could help bring people together, said the festival, even while governments remained locked in stalemate. The collaboration, blessed by all parties, was widely perceived as a win-win event.

Now comes round two: UK Now, the promotion of British culture in China, announced by the prime minister two years ago and winding its way around 20 Chinese cities until the end of November. But this time the aims are slightly different. British society is not particularly opaque and, as a certain event reminded us last weekend, its cultural ambassadors are well-known throughout the world. There are impressive highlights: the National Museum of China in Beijing is showing some of the finest ceramics from the collections of the British and the Victoria and Albert museums, and there are visits from the Akram Khan company, the Hallé Orchestra and the English National Ballet. But it is what is happening beneath the surface of these headline shows that is more revealing of the relationship between two long-established cultures.

At the Tianjin Grand Theatre, a vast and brand new cultural centre in the second-tier city that lies just a half-hour bullet train ride away from Beijing, a young Chinese woman with a rucksack slung casually over her shoulder is pounding the timpani in front of a video screen. The images show Esa-Pekka Salonen, principal conductor of the Philharmonia Orchestra, conducting Stravinsky’s The Rite of Spring. The young woman is alone, rapt in concentration, and largely in time.

The performance is part of “Re-rite”, a digital installation that invites audiences to immerse themselves in the heart of an orchestra and have a go at joining in. On the morning I saw the piece it was largely unattended. That is not a rare phenomenon in the extravagant yet underdeveloped world of Chinese cultural projects.

The Tianjin Grand Theatre, consisting of an opera house, a concert hall, a playhouse and a recital hall set in 90 hectares of the city centre, opened in April 2012 at a cost of £150m. It is a typical example of the Chinese political establishment’s grand cultural ambitions, which envisage mass participation in high culture: build it, and they will come. But it is not working out as simply as that.

“In China, you build a splendid concert hall and then it stays empty,” says Andrew Webb-Mitchell, the theatre’s 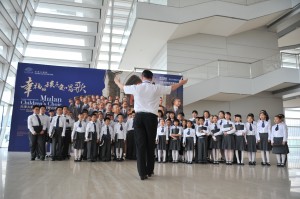 director of education. “Not enough thought has been given to the programming. But this one is very special.” Webb-Mitchell, an Englishman, is a former headmaster of King’s College Beijing and a composer. He says his model for bringing people into the Tianjin theatre is the Sage in Gateshead: “An absolute inspiration, somewhere that appeals to every level of society. That is what I am trying to replicate here.” He has established adult choirs who perform and practise in the theatre (“you get the foot traffic, and that brings the place to life”) and sprinkles his initiatives with improbable British touches: the children’s choirs are all named after English composers. “My eyes are always on the UK, because we are so cutting-edge,” he says.

Webb-Mitchell has identified the sector of Chinese society that is going to help him build a foundation for making the theatre successful: “If you are middle class and want to make a statement, your child plays the piano.” Love of classical music is carried like a status symbol. He says there are good string players in Chinese orchestras, “but the brass is awful. I am going to change that by building a brass tradition. To bring the British model here is going to work very well. And the potential is limitless. We can do in two years what would take 20 years in the UK.”

He is one of two foreigners – the director of international programming, Wray Armstrong, is another – who are bringing their knowhow to Tianjin. The Chinese have the will and the financial muscle to push culture forward but these men are there to fill the grandiose spaces with hungry audiences and willing students.

That is a British specialism that is playing a significant role in UK Now, says David Elliott, director of arts at the British Embassy in Beijing. The project is running four programmes that provide guidance for young arts managers, technicians and those working in the heritage and creative economy sectors. The infrastructure of culture may be its least glamorous component but it is one of the UK’s increasingly rare areas of unquestioned world-class expertise.

Elliott admits that it is “not always plain sailing” as far as visiting exhibitions are concerned. All of these need to be officially approved and there is an element of unpredictability about the process. He points to a photograph of Massive Attack’s Robert del Naja holding an enormous spliff, taken from a touring show of rock portraits. “I wasn’t sure about that one,” he says. Cinema is the most contentious area: Sam Taylor-Wood’s Nowhere Boy, for example, was not allowed to show in a recent festival. “You never get a proper reason,” says Elliott. “You get excuses, such as ‘It is too tiring,’ or ‘What is this film trying to say to the Chinese people?’”

Perhaps the most imaginative part of UK Now is the residency programme that has sent four musicians to China to work with local artists and programmers. One of these, the eclectic and digital-savvy composer Imogen Heap, wrote and recorded one of the songs on her forthcoming album in Hangzhou, where she used the “found sounds” of city life as a rhythm track (the evocative video for the song “Xizi She Knows” can be found on YouTube).

Heap used the six-week residency to make connections with local people (social connectedness is a prominent theme in her technologically sophisticated work). She says it had a profound effect on her: “I found a new life and energy, and I brought it back with me. I discovered a people that are deeply inspiring and care very much about how they are perceived by the world.”

She says the editor of the local newspaper which hosted her residency was initially sceptical about her project. “He told me ‘I didn’t think the English were very creative, and I didn’t think you would come up with anything interesting.’ But then he said that what I had done changed the way the people looked at their city.”

It is these initiatives that make UK Now a more organic, less headline-grabbing festival than its reciprocal project of four years ago. Last weekend’s Olympic bash – Mr Bean, James Bond et al – celebrated the way that British culture has resounded all around the world. But there are more subtle ways to win friends and influence people. China’s galleries, halls and theatres are filling up, to a distinctly British beat.