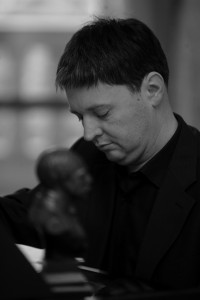 Born in Bishop’s Stortford, Hertfordshire in 1970, Andrew Webb-MItchell’s development as a musician and composer was long and unconventional. Having read music at what is now Anglia Ruskin University in Cambridge, he embarked on an international career in music education, holding positions in Kuwait and Taiwan before leading music departments in several schools in the United Kingdom and, more recently, China.

In 2008 he was appointed Director of Music and Performing Arts at the British School of Beijing and in 2010 became founding Headmaster of King’s College Beijing. He is currently also Composer-in-Residence for The British Schools Group.

Despite his long and distinguished career as an educator, Webb-Mitchell’s main focus and passion has always been composition. Having become disillusioned with contemporary classical music from a listener’s perspective, he is determined to reclaim the concert hall for modern audiences, giving them new works in a challenging, yet direct and accessible, musical language.

Webb-Mitchell aims to resurrect the lost art of great writing for the classical voice, composing new works which are carefully crafted to engage with both the listener and performer. Songs of Awe and Wonder was recorded by the Brno Philharmonic in 2011, Webb-Mitchell’s professional debut recording. His orchestral song The Inspiration of Night was premiered at the Tianjin Grand Theatre in October 2012 by Sir Mark Elder and the Hallé Orchestra.